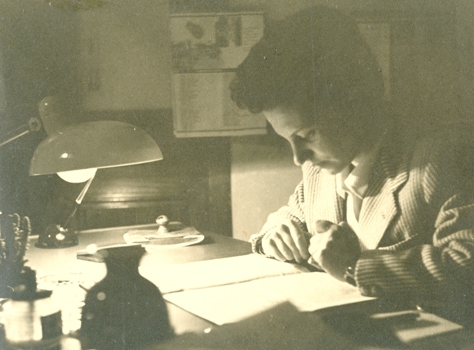 For centuries, the Accademia della Crusca has been holding the most important Archive for the history of Italian language.
Only since the half of XVIII century, the Crusca has regained its oldest documentary collections, that had been moved to the Magliabechiana Library, following a Rescript of the King which decreed that the Crusca be amalgamated with the Accademia Fiorentina (Florentine Academy). Thus, after the reopening desired by Napoleon I in 1811 in order to prepare a new edition of the Vocabolario, all the Accademia's documents were orderly and precisely preserved, and the process of retrieving the material still kept at the Biblioteca Magliabechiana began.
Nonetheless, the many changes to the site of the Accademia (from the premises in Piazza de’ Peruzzi, to the Convent of S. Spirito, the Medici Riccardi Palace, the S. Marco convent, and Palazzo de’ Giudici) have led to the dispersion and loss of material over the years.
Severina Parodi (see the picture), with her nearly fourty-years long work of collecting, collating, and partial cataloguing the archival material, is responsable for the Archive's relocation in the Medicean Villa of Castello, favorite residence of Medici since Lorenzo's time, then passed to Lorena and finally to Savoia, who gave it to the State in 1919. The Villa, designed to host the Accademia della Crusca, has been fully restored by Soprintendenza ai Beni Ambientali e Architettonici and entrusted to the Accademia, as said upon, in 1972.
In July 2003, the Archivio Storico has been moved into two new rooms, organized for an appropriate preservation of the archival material, thanks to a funding from Ente Cassa di Risparmio di Firenze.
In December 2005, the Historical Archive was officially opened and named after Severina Parodi (1925-2003), to honour her work in developing the patrimony of the Accademia.