The origins of the Accademia della Crusca can be traced back to the decade 1570 to 1580, and to the meetings of a group of friends who called themselves the "brigata dei crusconi" ('brigade of coarse bran'). They chose the name to distance themselves from the rigid pedantry of the Accademia fiorentina, in opposition to which they organized the cruscate, playful meetings with trivial speeches and conversations.However, literary intentions were not totally absent from these very early years of activity, which included debates and readings of some cultural value that dealt with works and authors in the vulgar tongue. Those traditionally cited as the founders of the Accademia are  Giovan Battista Deti , called il Sollo;  Anton Francesco Grazzini , il Lasca; Bernardo Canigiani, il Gramolato; Bernardo Zanchini, il Macer ato; Bastiano de’ Rossi, l’Inferigno, joined in October 1582 by Lionardo Salviati, l’Infarinato , who gave the decisive push towards the transformation of the aims of the Accademia and indicated the normative role that the Accademia would assume from that moment onwards.

Salviati himself gave new meaning to the name Crusca ('bran'), establishing the use of the symbology related to flour and to the process of bread-making, and giving the Accademia the purpose of "separating the flour (the good language) from the bran (the bad language)", following the language model first advocated by Bembo and then by Salviati himself, a model that was based on the supremacy of the Florentine vulgar tongue, modelled on the authors of the 14th Century. 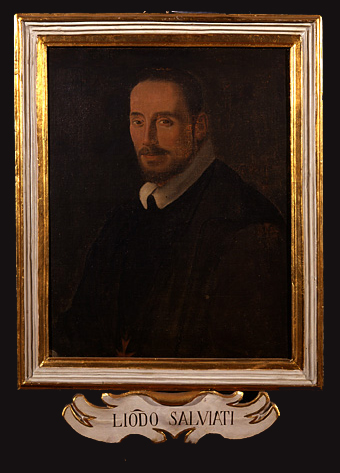 The first meeting in which the laws and statutes of the Accademia began to be discussed took place on 26 January 1583, but the opening ceremony of the Accademia only took place two years later, on 25 March 1585. In 1589, year of Salviati’s death, the functions of the arciconsolo ('archconsul'), counsellors, censors, castaldo ('land agent'), massaio ('farm manager') and secretary were established, and in 1590, the  frullone , the vessel used to separate the flour from the husk, was chosen as the symbol of the Accademia, together with the motto taken from a verse by Petrarch “il più bel fior ne coglie” ('she gathers the fairest flower').

They also decided that all the objects and furniture of the Accademia should have names relating to grain, bran, and bread, including the personal coats of arms of the Academicians, the "pale", wooden shovels which were painted with a symbolic image, together with the nickname of each Academician and his chosen motto.