In both Italy and worldwide, the Accademia della Crusca is among the leading institutions in the field of research on the Italian language. At present its activity is centered on the following: 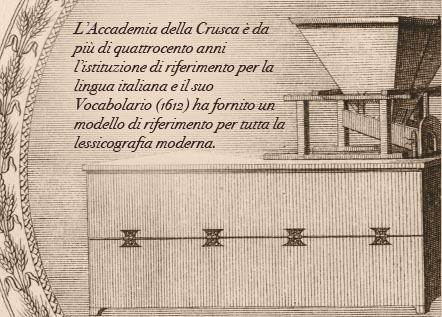 The Accademia della Crusca - literally 'the Bran Academy' - was founded in Florence between 1582 and 1583 on the initiative of five Florentine men of letters. One of them was Lionardo Salviati, inventor of a complete cultural and language-coding programme. The name "Accademia della Crusca" was derived from their lively meetings, playfully called "cruscate" ('bran-meetings'), and came to signify the work of 'cleaning up' the language (the bran is the part of the wheat that is discarded when the grain is cleaned up). The newly founded institution adopted as its motto a line from a poem by Francesco Petrarca: "il più bel fior ne coglie" ('she picks the fairest flower') and built up a rich symbology based on wheat and bread.

The main accomplishment of the Accademia, the Vocabolario (i.e. Dictionary, dated 1612, reprinted and enlarged several times until 1923), though subject to criticism for the limits it imposed on living linguistic usage, has made an exceptional contribution to the identification and diffusion of the Italian language and has served as an example for the great dictionaries of French, Spanish, German and English.

The new Vocabolario project, developed and started by the Accademia between 1955 and 1985, has the sole purpose of carrying out historical documentation and is one of the major lexicographic enterprises in Europe. The project is now the work of the Opera del Vocabolario Italiano, an Institute of the CNR (Consiglio Nazionale delle Ricerche i.e. 'National Council for Research'), affiliated to the Accademia and directed by Pietro G. Beltrami. The current director of the OVI is Lino Leonardi.