The Accademia della Crusca was refounded as an independent institution in 1811, with three main goals: the revision of the Vocabolario, the preservation of the purity of the language, and the analysis of works sent to the Accademia for the literary contest declared between 1809 and 1810.

In 1812 the new Academicians were elected, and the distinction between Resident and Correspondant Academicians was introduced; in the same year Pietro Ferroni was elected President and Lorenzo Collini Secretary; simultaneously, the project for a new edition of the Vocabolario, proposed in the past by Rosso Antonio Martini and Ildefonso Fridiani, brought under consideration. 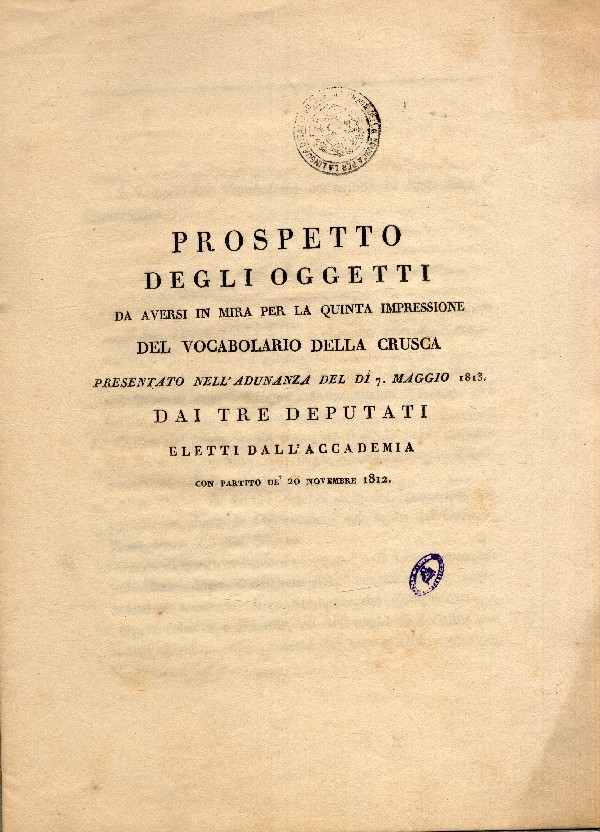 The fruits of the preparatory work undertaken for the new edition were collected in the publication Prospetto degli oggetti da aversi di mira per la quinta impressione del Vocabolario (‘Statement of the things to keep in mind for the fifth edition of the Vocabolario'), printed in 1813. This work did not, however, give any signs of significant changes from the last edition.
A big revolution in the criteria to be followed for the new edition was given by the Proposta di alcune correzioni ed aggiunte al Vocabolario della Crusca ('Proposal for some corrections and additions to the Vocabolario della Crusca') by Vincenzo Monti. The first volume was printed in 1817: Monti’s harsh criticisms, which pointed out the lack of entries related to the arts and the sciences as well as the presence of words that were incorrect, archaic, or too exclusively Florentine, led the Academicians to give greater thought to the list of the authors quoted.
In 1833, there were four academic boards working on the Vocabolario: one for the Latin and Greek terms to be appended to the Italian entries, one for the scientific terms, one for the examination and correction of the teoriche grammaticali ('grammatical theories'), and one for the revision of the linguistic analyses, for additions and corrections.
The working method adopted proved to be so slow however that between 1838 and 1839 Archduke Leopoldo himself intervened, trying to speed up operations: he proprosed holding two weekly meetings and decided to publish the Vocabolario as a series of brochures.
The first of them was published in 1843 but between 1844 and 1851 only four other brochures were published. The compilation of the letter A was only completed in 1854 and, due to the slow progress of the work, the criteria were revisited and the Academicians decided to create a Glossario, 'Glossary', in which the parole e locuzioni antiquate, straniere, corrotte e incerte della nostra lingua ('antiquated, foreign, corrupted and uncertain words and expressions of our language') were to be collected. The compilators also decided to insert etymologies instead of the Latin and Greek entries.
The first volume was printed in 1863 with a dedication to King Vittorio Emanuele II and the following volumes appeared irregularly until 1923, a year which saw works being interrupted at the letter O (the last word recorded is ozono 'ozone').

The Academicians had also attended to the final part of the entries; the preparatory works for entries from letter P to Z are held in the Historical Archive of the Accademia. 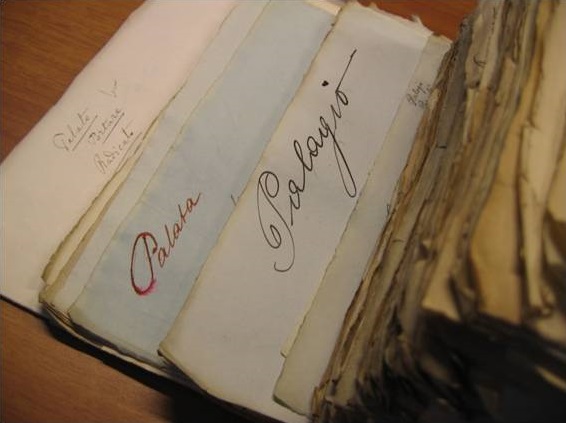