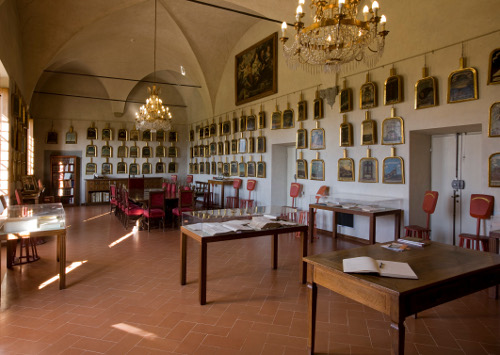 The symbology of the Accademia is based on the idea that "good" language is like the flour that is separated from the bran. This image finds its immediate reference point in the activity of the lexicographers whose goal was to propose a model of language cleaned of the impurities of its usage, but it is also apparent in the adoption of objects and furnishings closely linked with the cultivation of wheat, its grinding and making into bread.

The most important symbol of the Accademia is the frullone, or 'sifter', the vessel used to separate the flour from the bran. The traditional furnishings of the Accademia include 18 gerle (i.e. panniers) or ceremonial academic chairs (the oldest ones date back to 1642) made of an upside down bread basket with a bread shovel skewered through it to form the backrest (the addition of the shovel was Leopoldo de’ Medici’s idea). 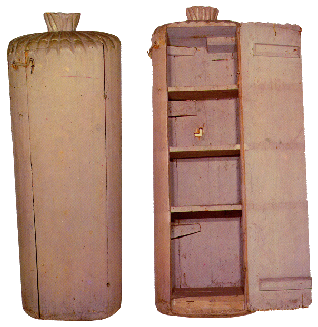 2 sacchi (i.e. sacks), which are lockers shaped as sacks, with a door and shelves inside to preserve the "flour", i.e. the statutes, regulations and other writings approved by the academic censors.

In the Hall of the Pale we find two paintings on display that are very significant for the history of the Accademia: the portrait of Saint Zanobi, archbishop of Florence (who died in 417 A.D.), chosen in 1650 as protector of the Accademia; an allegoric painting representing Filippo Baldinucci, Academician and author of the first Vocabolario dell'Arte e del Disegno ('Dictionary of Art and Drawing') (1681), compiling his work, assisted by the Arts and the Accademia della Crusca.

The hall takes its name from the 153 ancient shovels that are preserved here, personal emblems of the sixteenth and seventeeth-century members of the Accademia. In another hall you can see the pale belonging to some of the contemporary Academicians, which testify to the desire to keep this ancient tradition alive.
Every shovel bears the academic name of its owner, the motto (a line of verse originating from the 14th century usually composed by Petrarch, chosen to encapsulate the spirit of the enterprise chosen by the Academician) and an image. The iconography of the shovels has been an object of study precisely because of the peculiarity of the subjects, always linked to the agricultural, domestic or culinary spheres, whose meaning, through their elevation to emblems, is subject to a metaphoric shift.

The complete and detailed catalogue of the pale was edited by Roberto Paolo Ciardi and Lucia Tongiorgi Tomasi (Le pale di Crusca. Cultura e simbologia, Accademia della Crusca, Firenze, 1983) and can be purchased at the Edizioni di Crusca. Another volume dedicated to the pale is the anastatic reproduction of the manuscript no.125 of the Library of the Accademia, Raccolta d'imprese degli Accademici della Crusca (edited by Domenico De Martino, with a foreword by Nicoletta Maraschio, Biblion Edizioni, Milano-Venezia 2010) also available for purchase online. It is possible to search the images and descriptions of the pale at this page or at this Facebook gallery.